I am usually much more inclined to bake desserts than breads, but I’m trying to do better. Recently, Quinn was planning to grill filets for us, so I decided that I would make some bread. Looking through my seemingly bottomless stack of “recipes to try,” I happened upon a recipe from a several years old Cooking Light. Actually, it was several pages I had cut out and stapled together – an article entitled “The Yeast Among Us.” I’m sure some of the other recipes may be popping up here, too. Anyway, let’s get down to business.

First, dissolve 1 package of dry yeast (2&1/4 teaspoons) and 2 teaspoons of sugar in 1/4 cup of warm water (105-115 degrees). After 5 minutes, stir in 3/4 cup of milk and 1/2 cup of evaporated skim milk. The recipe stated to use 1% milk, but I used skim since that was all I had. At this point, I transferred the yeast mixture into my stand mixer.

At this point, I sort of deviated from the recipe’s instructions. Instead of kneading by hand for 10 minutes, I let my stand mixer with its trusty dough hook do all the work. During the kneading process, up to another cup of flour can be added, a tablespoon at a time, to keep the dough from being sticky. The dough should be smooth and not tacky. Basically, you don’t want the dough to stick to the sides of the bowl or to your fingers when you touch it. I added close to the whole extra cup of flour to get to this point.

Place the dough into a large bowl that has been sprayed with cooking spray, making sure to turn the dough to coat it with the cooking spray. Cover the bowl and let the dough rise in a warm, draft-free place for an hour, at which point it should be doubled in bulk.

After the dough has risen, punch down the dough to remove as much of the air as possible. Cover for 10 more minutes. Then, divide the dough into 18 equal portions. I did this by weighing the dough, dividing the amount by 18, and then measuring out the portions. Divide each of the 18 portions into three pieces and shape each of those pieces into a ball.

Place 3 balls in each muffin cup of a regular muffin pan that has been coated with cooking spray. To state the obvious, you’ll end up with 18 rolls. Cover the muffin pans and let the dough rise in your designated warm, draft-free place for about 30 minutes.

Preheat oven to 350 degrees. Mix together 1 tablespoon of water and 1 lightly beaten egg white. Brush this mixture over the dough. Bake for about 20 minutes or until your desired level of doneness. These are best served warm. And a little butter doesn’t hurt, either. 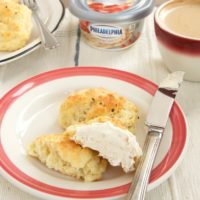 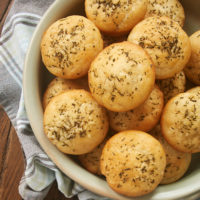 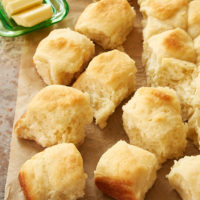