Every trip to the bookstore begins with a perusal of the cooking section. I am generally very well disciplined and resist buying anything. Sometimes, though, I am not so strong. So, as you can probably guess, I have a new cookbook, Better Homes & Gardens New Baking Book. As a first impression, this seems to be a good basic baking cookbook. With over 600 recipes, it would seem to be quite thorough in those basics. Of course, new cookbook means new recipes, which leads me to Brownie Pudding Cake.

This cake is mixed as two separate components. First the cake, then the pudding. As it bakes, the cake rises to the top, leaving a pudding layer on the bottom. The texture is somewhere between cake and brownie. No icing is required, but ice cream is a perfect companion.

Mix together 1/2 cup of AP flour, 1/4 cup of sugar, 1 tablespoon of unsweetened cocoa powder, and 3/4 teaspoon of baking power. To this mixture, add 1/4 cup of milk, 1 tablespoon of cooking oil, and 1/2 teaspoon of vanilla. When this becomes smooth, stir in 1/4 cup of chopped pecans (or walnuts). Put batter in an ungreased 1-quart casserole. Apparently, I have no 1-quart casserole, so I made do with a 1 & 1/2-quart. The cake was not as thick, but it turned out fine.

For the pudding layer, mix together 1/3 cup of sugar and 2 tablespoons of unsweetened cocoa powder. Gradually stir in 3/4 cup of boiling water. Pour this mixture over the cake batter.

Bake at 350 degrees for about 30 minutes or until the cake passes the toothpick test. While it’s cooking, check out what’s going on through your oven window. I admit I was overly intrigued to see the cake rise to the top of the pan.

The recipe states that the yield is 4 servings. I got about 6 out of it, but I did use a different size pan. I think next time, I’ll double the recipe. It will be interesting to see if changing the overall quantity will change the result.

This cake is best served warm. And, did I mention ice cream? 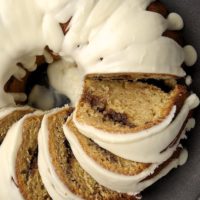 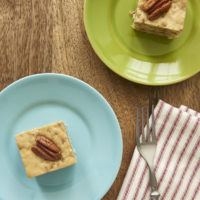 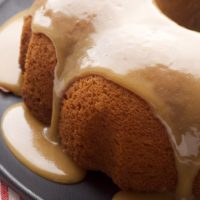