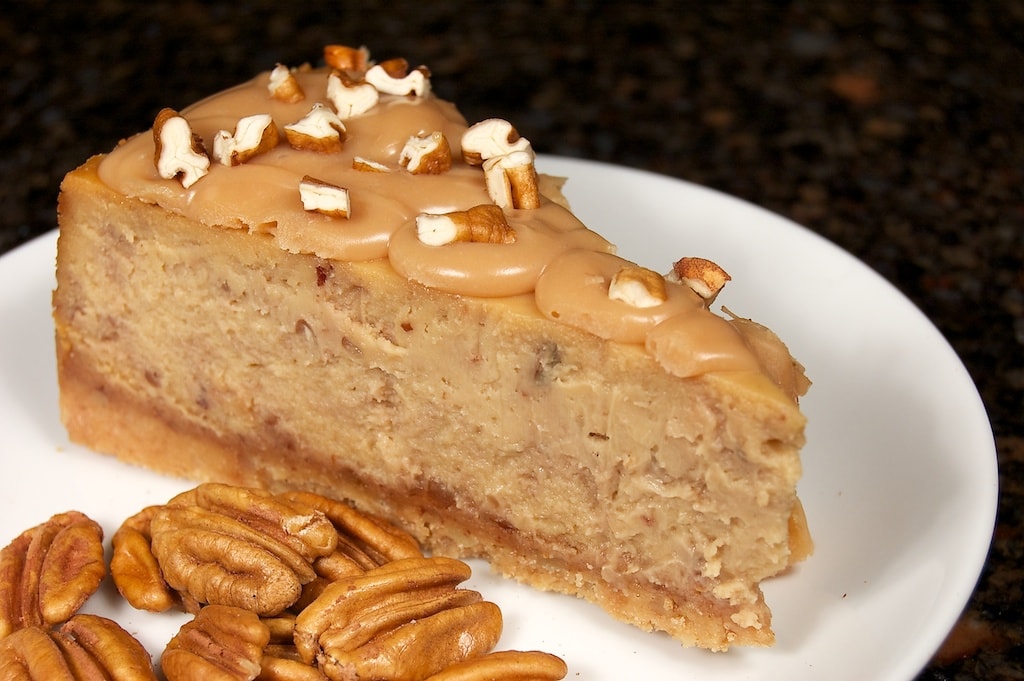 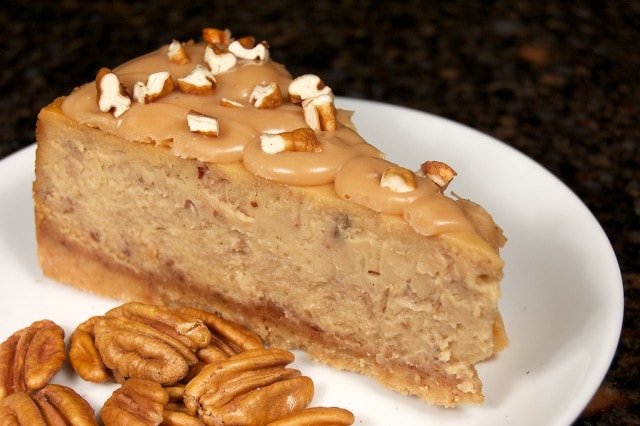 Today is Jennifer’s birthday! While she’s had to work all weekend, I’ve been doing my husbandly best to make it a fun birthday celebration. First, dinner and homemade dessert with my parents Friday night. Then there were presents last night — many presents. I won’t go into details, but suffice to say she’s been good this year. And then dinner tonight at her sister’s house.

But the big story is about the cheesecake she requested. Remember the praline liqueur she put in the brownies recently? I sought out this wonderful nectar specifically for her cheesecake, appropriately called a praline cheesecake. Through diligent experimentation, I found that praline liqueur plus vanilla ice cream equals indescribable goodness.

Back to the cheesecake. This was, as Jennifer pointed out, my inaugural cheesecake. She is the queen of cheesecake having honed her technique over several years. A friend asked if I was nervous about making her a cheesecake and I was reminded of a great quote from Alton Brown’s recent seminar in Nashville. During the filming of Feasting on Asphalt, his wife (with the help of both their mothers) moved into a new home. Since then, neighbors dropped by to welcome them but all committed a terrible southerner faux pax: they brought no food, no goodies! They were too intimidated to cook for Alton. His quote: “So, you were too lazy to cook and you’re going to blame me?!”

Undaunted by the challenge of baking for my official baker, the gloves came off and the Alton Brown “Science, it’s what’s for dinner” shirt went on. Armed with Jennifer’s favorite cheesecake cookbook, I Love Cheesecake, and her encouragement, I set forth to build her birthday cheesecake.

Foundation cliches aside, a wimpy crust can relegate a cheesecake into the ‘break’ category. The crust in this recipe is a combination of vanilla creme cookies, melted butter, and finely chopped pecans. The recipe calls for a 9″ springform pan, but Jennifer’s experience with recipes from this cookbook suggests that the filling will still be tall in a 10″ pan. While there is usually ample filling, she has found that many crusts are too skimpy as made from a recipe, so I doubled the crust recipe and used all of it.

With the crust sitting to the side and the oven preheating to 350 (we’ll talk more about the temperature in a bit), I turned to the stack of four packages of cream cheese resting on the counter. I’m a firm believer in letting things thoroughly reach room temperature, so these had been out of the fridge for quite a while.

Okay, an aside and a warning. This recipe (actually every recipe in this book) takes a very patient approach to the cheesecake manufacturing process. As AB is fond of saying, “your patience will be rewarded.” I’m a believer. But do yourself a favor if you make this cheesecake. Start before 8PM. Jennifer laughed at me as I started knowing how long it would take. Some of you may be quicker at the mixing phase, but the four and a half hours in the oven meant that I was putting it in the fridge around 2AM.

The filling contained dark brown sugar and dark corn syrup which made a beautiful, pecan color. These two ingredients were combined with the cream cheese and cornstarch and mixed until smooth. Four eggs were incorporated, one at a time, then the good stuff was added: praline liqueur, vanilla extract, and butter flavoring. Jennifer is a stickler for not overmixing batters, so I did my best. To incorporate the chopped pecans, I removed the bowl from the mixer and folded them in by hand.

With the filling atop the crust, the cheesecake was introduced to the 350 degree oven. After 15 minutes, the temperature was reduced to 200 degrees for two hours. At that time, the cheesecake still looked a little wet in the center, so I gave it another 20 minutes. After this time, I removed the cheesecake, ran a knife all around the edge, and returned it to the oven which I turned off. The cheesecake spent another two hours in the oven allowing it to slowly cool.

Why all of this? Cracks. I would have been devastated to present a cheesecake to Jennifer with a gaping rendition of the Grand Canyon. The slow cooking and gentle cooling prevents cracking while cooking the cheesecake thoroughly. Running the knife around the outside is very important, too, since the cheesecake shrunk about 1/4″ from 200 degrees to room temperature. If the sides had stuck to the walls of the pan, crackage would surely have ensued. To my sleepy pleasure, the cheesecake was uncracked at 2AM when it went into the fridge.

This cookbook is big on toppings and supplies a wide variety. The topping included with this recipe consisted of white chocolate melted with sour cream, mixed with caramel ice cream topping (the kind that makes the hard shell) and a sprinkling of chopped pecans. I made this topping and found it less than ideal. It tasted a little like a funky caramel apple coating. I applied it to a third of the cake because I had already been thinking of alternative toppings.

Given both of our affinities for chocolate, it seemed a logical choice. I had some Lindt Lindor truffles on hand and gently melted them in a small pan which I had used to roast some chopped pecans. I drizzled this over another third of the cake and topped the topping with a few slivers of another truffle.

The remaining third of the cheesecake was staring at me with, well, a blank stare. I didn’t have any plans for this, but leaving it untopped seemed wrong. I surveyed the pantry, but was uninspired. I’d hoped to integrate more of the praline liqueur into a topping, but with what.. I opened the refrigerator and my eyes fell on a carton of heavy whipping cream. A cup of this and a quarter cup of praline liqueur were whipped in the mixer for about a minute. I added about a tablespoon of sugar and continued whipping the glorious mixture on high until I liked what I saw, about 2 minutes. Sampling the mixture, I decided right then which slice of cheesecake I would sample first. Divine!

We each sampled a slice of untopped cheesecake last night after the stack of presents were opened. The flavor was rich and true to the praline title. The cooking method achieves a uniformly cooked cheesecake from outside to center. The texture was soft and creamy yet firm enough to hold its shape. I’m eager to try it out again tonight with the praline whipped cream topping. 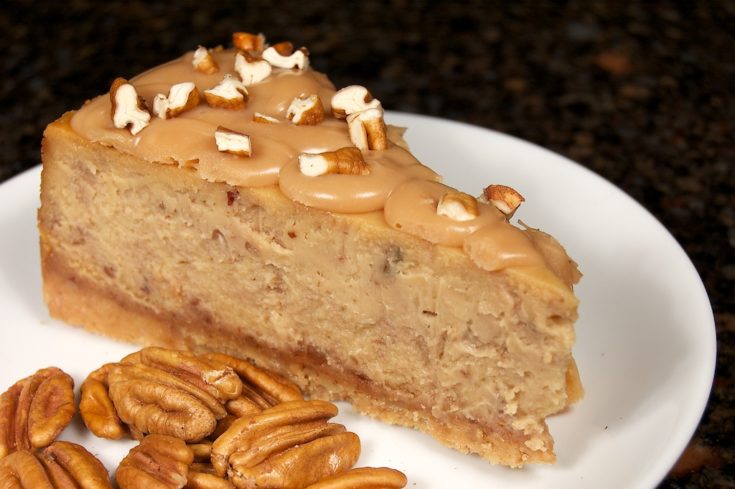 For the whipped cream:

To make the whipped cream:

This post contains affiliate links. If you make a purchase through one of the links, I’ll receive a small commission at no additional cost to you. 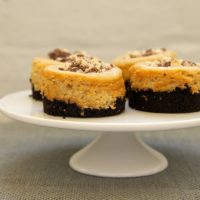 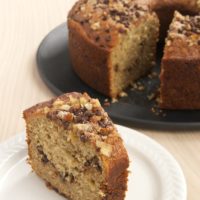 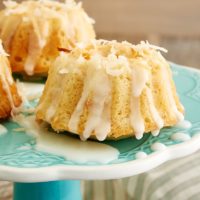