I attemted to make this recipe for Garlic Parmesan Popovers to go with our dinner tonight. I never thought I could have something fail so badly that I wouldn’t be willing to put a picture of it here. Well, there will be no picture. No, I’m far too embarrassed. I shaved a considerable amount of time off their recommendation, and still the sides and tops were overcooked. The insides were not thoroughly cooked at all.

I wish I were the kind of baker who could diagnose and treat such problems. I did think that the batter was far too liquid. Honestly, I had my doubts when it was mixed and going into the oven. Anyway, we survived dinner without bread. And it was somewhat cathartic to dump them in the garbage.

In unrelated and more pleasant news, I was tagged by Peabody for the Foodblogger’s Guide to the Globe. So, here is my list of 5 things to eat (or in my case, eat again) before I die.

1. New York pizza. Quinn and I love, love, love New York. We visit as often as possible. One of the best things about NYC is the food, especially pizza. I don’t necessarily care too much for where we eat it, but it’s usually the first meal we seek out when we arrive.

2. Fried pies. My grandmother was the queen of fried pies. For those of you unfamiliar, a fried pie is exactly what it sounds like. Filling is wrapped inside pie dough. The sides are sealed together with a fork. And then you fry them. Chocolate and apple were her specialties.

3. Tiramisu at Amerigo. This is the best tiramisu I’ve ever had. It is served with two sauces – vanilla cream and chocolate Kahlua. I think why I like theirs in particular is that they go easy on the coffee flavor. It’s really divine, and if you’re ever in Memphis or Nashville, TN, or Jackson, MS, you really must try it.

4. Really good chocolate. No brand or geographical preference. Just make it good. When Quinn and I were dating, he went on a work-related trip to Switzerland and he returned bearing many, many chocolate gifts for me. So many that I actually had to get rid of some of it because there was no way I could eat it all.

5. Breakfast at Kenwood Inn, Sonoma. Quinn and I stayed at Kenwood Inn on our honeymoon. Our suite was in the same building as the kitchen, and the smell of breakfast would get us up every morning. As we were getting ready, we’d try to translate the incredible smells into what might await us next door. There was always fresh fruit, which was followed by some of the best foods either of us have ever had. We talk about going back some day, and hopefully we’ll get there before too long.

Now, I must tag 5 other food bloggers to make their list. Many have already participated, and hopefully I’m not tagging anyone who has already been tagged. Okay, guys, have fun… 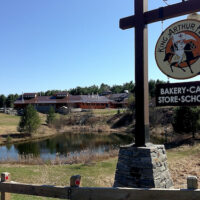 8 Comments on “Popovers and my guide to the globe”