Quinn and I are back home after travelling to Nashville for their guest chef lecture series featuring Alton Brown. We only found out about this last week, so all the VIP tickets were sold. Those tickets included a “meet and greet” function with AB. We had half-jokingly contemplated trying to take down someone with VIP tickets so we could have the opportunity to meet him.

A bit of background information would most likely be beneficial at this point. Quinn discovered AB a few years ago through our good friend David. Since then, our TiVo has been recording Good Eats at every opportunity. The episodes Quinn has found most useful are saved permanently. It has beome traditional now that “Tender is the Loin I” is viewed before most steak preparation. And Quinn’s favorite t-shirt? That would be AB’s “Science – It’s what’s for dinner.” Okay, so you get the picture. AB is Quinn’s hero. They are mutual geeks, which was further proven yesterday, but I’ll elaborate on that later.

Alton’s cooking demonstration was turkey frying. I’m not sure if this is a Southern thing or not, but there are a great many turkeys that are deep-fried around Thanksgiving. I’ve had some myself, although it’s not my favorite. After smelling (yet, sadly, not eating) AB’s fried turkey, I think I might have to change my mind.

The method Alton has devised for frying a turkey is a tad unconventional. Let’s just say it involved a giant pot, a propane tank, pulleys, and a ladder. And, to satisfy the fire commisioner, about 10 firemen. Quinn, who does indeed have a degree in engineering, will elaborate more on this.

One thing I must mention is that AB is working on a new cookbook – Live and Let Fry. Knowing that made the turkey frying demonstration make sense. He feels that frying, which is his favorite form of cooking, is underutilized. That led him to turkey frying, which he has always been reluctant to do, mainly for safety reasons. To emphasize the danger that comes with turkey frying, he showed some pretty scary pictures of what happens when deep frying goes bad. I won’t elaborate on the details of the specific cooking presentation. AB is expecting a Nobel Prize, however.

For the last 30 minutes, he took questions from the audience. These were many and varied, so I will stick to the high points. I took notes as best I could, so these aren’t verbatim.

Will you ever be a competitor on Iron Chef America? I’m more likely to be the secret ingredient. It’s not that I’m scared, but I would get my butt so kicked.

You mentioned in “Behind the Eats” that one of the episodes was made in your own kitchen. Which episode was it? The one about peas.

How did you start cooking? I couldn’t get dates any other way. (He went on to explain how he would prepare date meals with escalating prices, eventually ending with “The Closer.” This was a meal whose ingredients could be reassembled the following morning for breakfast. The one time he dated a girl long enough to get to that meal, she called while he was cooking it and broke up with him.)

You say that raisins are always optional in your kitchen. Why is that? No one wants to eat anything that raisins have to be in.

After his frying extravaganza, Alton was gracious enough to stay and meet those of us without VIP tickets. He signed my well-used copy of I’m Just Here for More Food, his baking cookbook. Of course, there was the requisite picture taking. Then, he and Quinn started talking about computers. He was very personable, witty, and, well, nice. It was definitely worth the drive. 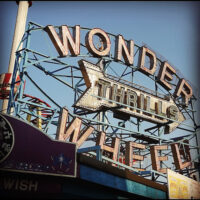 Weekly Mix and a Stack of Cookbooks 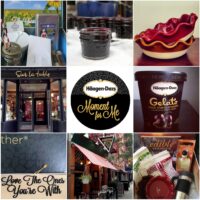 Weekly Mix: Taking a Moment for Me