For our 4th of July dessert, Quinn suggested brownies. I found this recipe in a bargain table cookbook entitled Better Homes and Gardens New Baking Book. It is also available on BH&G’s website.

First, a complaint. Who has an 11″x7″ baking pan? Certainly not me. I even checked online. Not to be found at either Amazon or Baker’s Catalogue. Anyway, I went with a 10″ round pan. They work out about the same. Okay, that being said, on with the recipe.

The crust is a combination of oats, flour, brown sugar, and butter, creating an oatmeal cookie crust. I swear I could have just stopped there and eaten that. But, we push on.

The filling was very simple. Egg, sugar, flour, milk, etc. I was a bit hesitant to use unsweetened chocolate, but the amount of sugar made up for it. This is one of those easy, quick batters that just requires a bowl and a spoon. I substituted pecans for walnuts because, well, I don’t like walnuts. My baking time was about 20 minutes.

About 2 minutes into making the top layer, I became doubtful. A cup and a half of powdered sugar seemed like an awful lot to mix with an ounce of chocolate and 2 tablespoons of butter. Do yourself a favor, and go ahead and add the 2 tablespoons of water while you’re mixing the frosting. You’ll need it. It probably could have taken more water, but I stopped there.

As for the taste, these brownies are quite good. The oats and chocolate work well together. If I were to make these again, I think that I would process the oats in a food processor first to try to make the crust a little more cohesive. This may or may not work, but it was my first thought upon eating them. 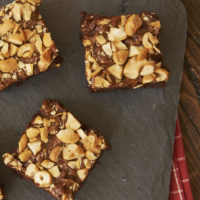 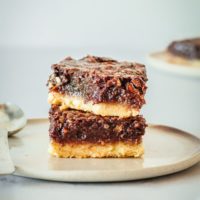 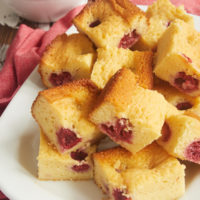